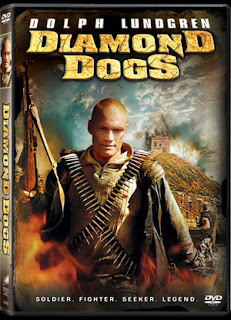 American ex-soldier RONSON (Dolph Lundgren) has fallen on hard times. He has been reduced to brutal illegal prizefights in the dingy backstreets of a city in Inner Mongolia in an attempt to pay off his debts.
Things go from bad to worse after Ronson is caught in the act and arrested. The judge offers Ronson a choice: pay off all his debts in a month or return to jail. While Ronson is busy debating his limited options, he encounters the alluring ANIKA (Yu Nan), whom he follows down an alley only to be attacked by three thugs. After successfully beating off his attackers, he learns that the fight has been an elaborate audition for Anika’s stepfather CHAMBERS, a wealthy New York art collector. Chambers offers Ronson enough money to settle all his debts if he will guide an expedition composed of Chambers (William Shriver), Anika, several of Chambers’ men and archeologist ANG SHAW into the rugged mountains of Mongolia. With the help of a secret map, Chambers hopes to locate a fabled temple, said to contain a priceless jeweled Buddhist tapestry known as The Tangka of God Ochirvaani.. Said to possess great spiritual … perhaps even supernatural powers, the Tangka is protected by a deadly curse. The rugged terrain and hardships of the journey do not deter Ronson and company from their quest, nor do the fierce battles with rival Tangka seekers ZHUKOV and his band of mercenaries. At last the expedition locates the cave containing the sacred temple.